Welcome to a unique place in a luxurious historic residence in Zakopane, where the spirit of past, rich history of the building is harmoniously blended with contemporary comfort and elegance. It is a place where you can relax, maintain complete privacy and at the same time enjoy the standard, equipment and service comparable to the world's best hotels.
Willa Elżbiecina is a beautiful historic wooden villa in the Witkiewicz style, from 1912. It was completely renovated and rebuilt into a luxury guest house in the years 2016 - 2019.
From 1922, the villa was the property of Wojciech Korfanty, the leader of the Silesian Uprisings and a close friend of Stanisław Ignacy Witkiewicz.

Willa Elżbiecina is located in one of the most beautiful and green parts of Zakopane, the "Office Lots" district, in the direct vicinity of the Wielka Krokiew ski jump, the Kuźnicki Roundabout, and the Tatra National Park. Within a 10-minute walk, there is Krupówki street, the most representative pedestrian zone of Zakopane with countless shops, restaurants, bars and cafes.
At a distance of 2 km, there is the lower station of the cable car to KasprowyWierch. It can be reached after a 30-minute walk or by bus from a stop located 3 minutes from the villa.
From the front, the residence is adjacent to Zamoyski Street, whereas,  from the garden side to the picturesque mountain stream Foluszowy. It is easily accessible and surrounded only by single-family and guest houses.

The Villa is surrounded by an elegantly designed, constructed and maintained the garden, in which a wooden shed with a fireplace serving as a grill is located, enabling the organization of outdoor parties.
Granite alleys lit by stylized lamps, fluffy grass and beautiful plants encourage guests to relax in this quiet environment. The stream flowing from the south creates an additional atmosphere of a mountain valley.

The car park located on the street side can accommodate up to 14 cars. The whole area is fenced, lit and monitored. The entrance to the residence is via an automatic gate, controlled on both sides with a proximity card. 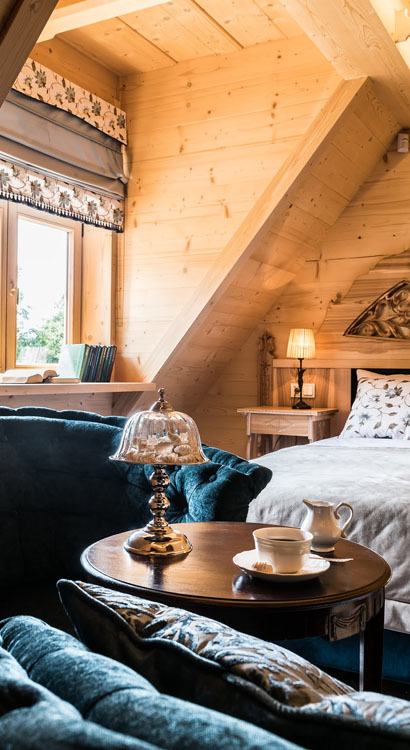 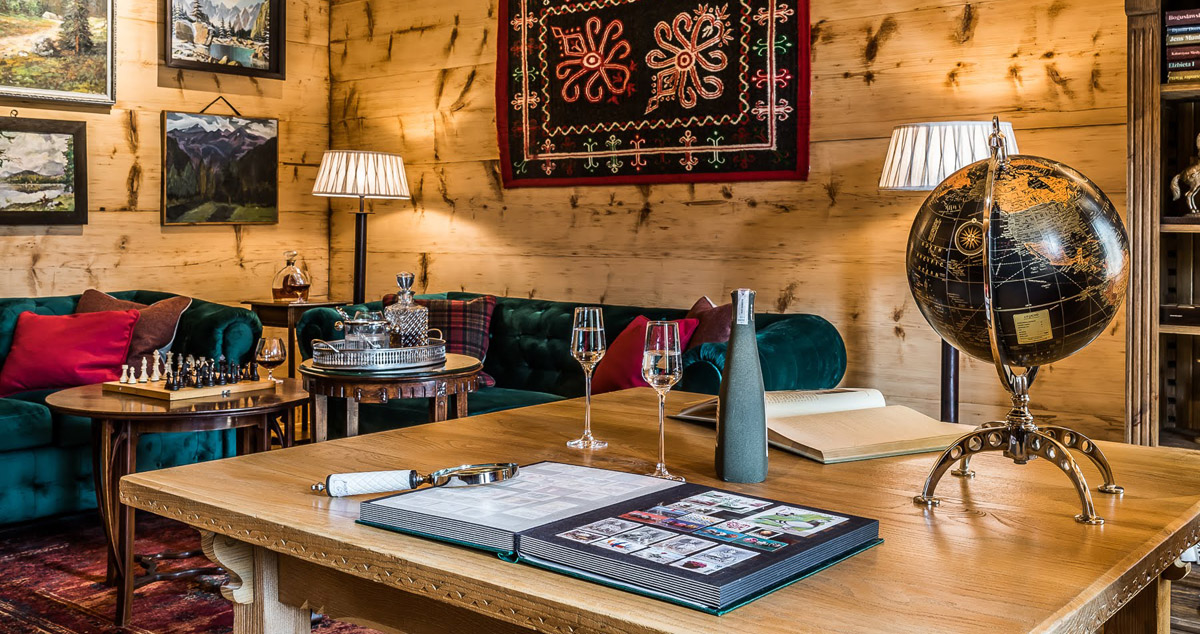 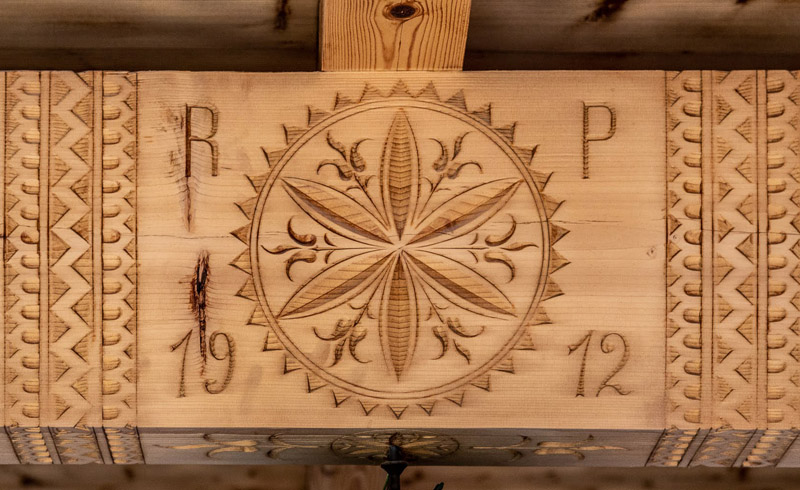 Wojciech Korfanty was a significant figure on the Polish road to independence. Son of a miner, he became the legendary leader of the Second and Third Silesian Uprising, the creator of the Second Polish Republic, a statesman, fluent in four languages. He was an experienced politician who could speak well and engage crowds. Today, after the turmoil of the war and communism, we can admire a little number of Korfanty's mementos.

Willa Elżbiecina was built in 1912 and was the property of Wojciech Korfanty, who around 1920 bought it for his wife Elżbieta. The villa was named after his wife, Elizabeth of Sproty.
The building has survived to our times almost in its original form. An original sapling with the date '1912' has been preserved in the dining room. The author of the building is unknown, it is believed that the designer and contractor could have been a Krakow architect, Tadeusz Prauss, the author of the nearby Jadwinówka II villa (built for the daughter of TytusChałubiński), the west wing of the Villa Koliba and the shelter at MorskieOko in the Tatra Mountains.
In 2015, the property was purchased by current owners. Mrs. Małgorzata, a co-owner, was born and raised in this villa. Therefore, the whole heart put into the renovation and revitalization process and carefully collected knowledge are visible in the interiors which were designed with love and passion. The owners managed to restore the climate from the glory days of the building.
They created a place where one can feel the atmosphere of the turn of the 19th and 20th centuries harmoniously combined with the latest technologies which bring the building into the 21st century.
In September 2019,  Villa Elżbiecina was made available to the Guests.

The arduous process of reconstruction began in November 2016. All work, from the preparation of technical documentation through implementation, was carried out under the supervision of the Municipal Conservator of Monuments. The architectural design of the reconstruction was prepared in the "AMAR" studio in Zakopane, while the interior design was prepared by the "Studio Formy" studio in Zakopane.
Since 2004, when the last tenants left the building, it was practically uninhabited which caused a significant deterioration of its technical condition. Lack of heating, leaking roof, humidity and fungus caused a lot of damage to the structure of the building. It was necessary to dismantle and replace the entire roof structure and the ground floor wing from the north-east. The most valuable three rooms from the garden side have been preserved, together with the original ceilings and carved pine tree ceiling beams, part of the main hall and kitchen.
Old walls built of amphibians (spruce beams), as well as ceilings and pebbles, were cleaned, sandblasted from the outside and inside, and then sanded and protected with special wood preservatives.

The wooden floors on the ground floor have been dismantled and replaced with insulated concrete structures finally covered with a noble oak stave and stone cladding.
Window and door woodwork have been largely restored from durable larch wood. All window and door fittings on the ground floor of the building have been removed from the old windows, sandblasted, powder coated and re-installed. Some of the interior doors were renovated, the rest were restored. All windows on the ground floor remained, as in the original with two separate wings: internal and external. To improve the thermal insulation of the building, the outer wings have been equipped with a heat protection glazing unit.


The original furnaces that were in the building were inventoried and dismantled. After the reconstruction of the ground floor ceilings, all furnaces were reassembled, however, their heating technology changed. The solid fuel furnace has been replaced with a coil from a central heating pipe. From now on, the ovens are heated with water from the building's central heating system. Beautiful Art Nouveau furnaces from the turn of the 19th and 20th centuries from the demolished tenement house in Szczawnica were installed in the hall and dining room.
All installations were replaced. The installation of mechanical ventilation with heat recuperation, air conditioning, central heating system partly with underfloor heating and intelligent building control system using KNX technology were installed and launched. The use of these modern technologies allows one to control the temperature parameters and thus one can keep the historic part of the building in good condition. The use of advanced electronic control and alarm systems allows to improve the operational efficiency of the building and react in advance to failures before they cause damage to the wooden structure.
The building is heated with an ecological geothermal installation constituting the municipal network in Zakopane.
The entire roof structure and the rooms in its cubature have been rebuilt, maintaining the original shape of the building to a significant extent. Raising the ridge (roof gable) by approx. 2 m allowed the living space on the floors to be increased in comparison to the original structure. Natural materials were used: spruce, larch, ash and oak. The entire external formwork in the roof body was made of resistant larch wood and protected with special protective measures.

In contrast to the villa, the Spa building was newly built. Alleys, driveways and parking were made of granite cubes. The street-side fence was demolished and rebuilt from stone in its original form. The original fence spans were dismantled, repaired, sandblasted, galvanized and reassembled after powder coating. The villa building is mostly equipped with age-old furniture after a thorough renovation. The rest are hand-made replicas of regional furniture from the interwar period, made by a local artist using highlander motifs. Carefully refurbished lamps and chandeliers were installed.
A wooden shelter with a fireplace as a grill is placed in the garden which was designed and created with endemic plants.


To carry out such a comprehensive reconstruction and renovation, the investor had to bring together the best local craftsmen in this project: carpenters, roofers, stove fitters, woodcarvers, blacksmiths, and stonemasons as well as high-class specialists in new technologies: heating, ventilation and automation systems. Most of the work was done by local companies and, where possible, from local natural materials.
The reconstruction and furnishing process was completed in September 2019. 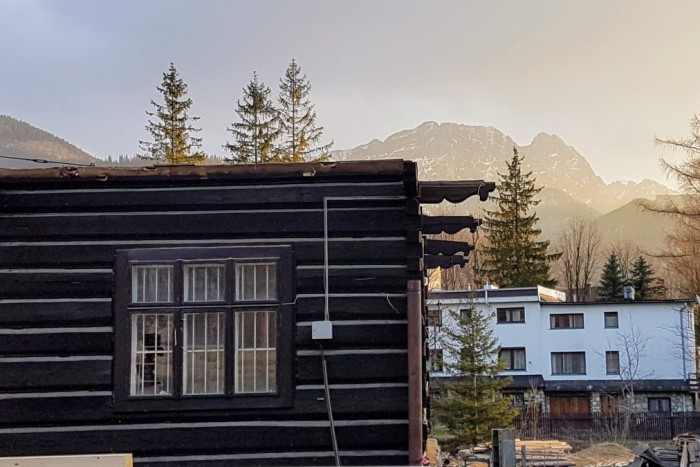 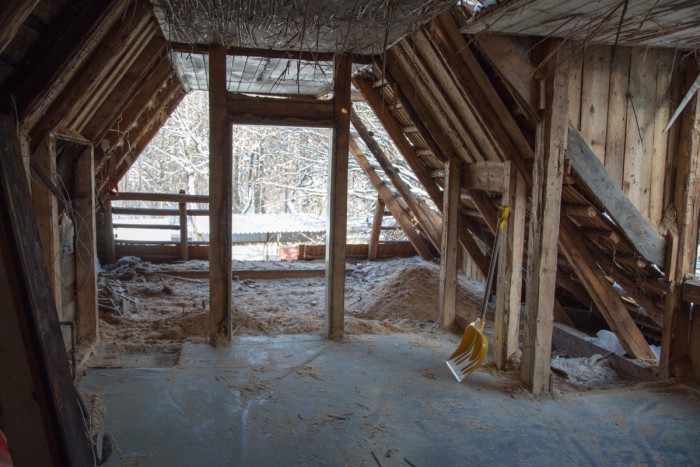 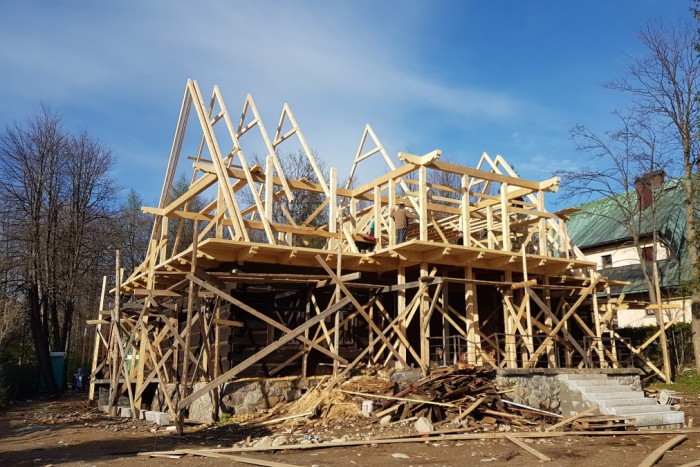 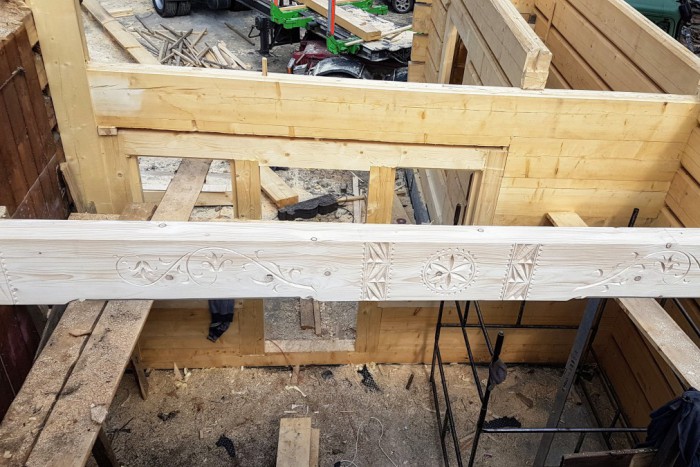 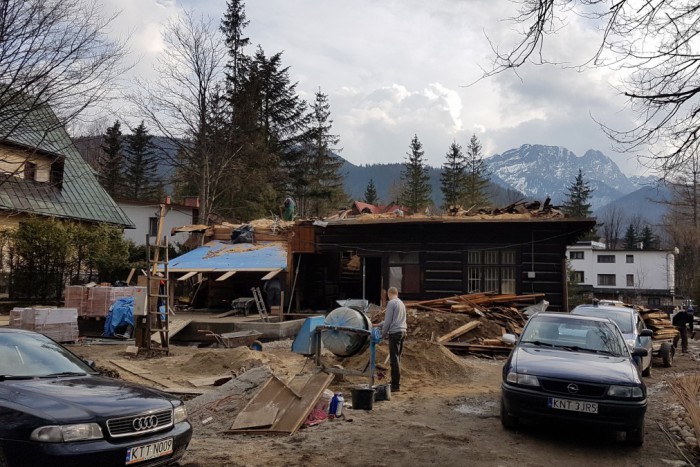 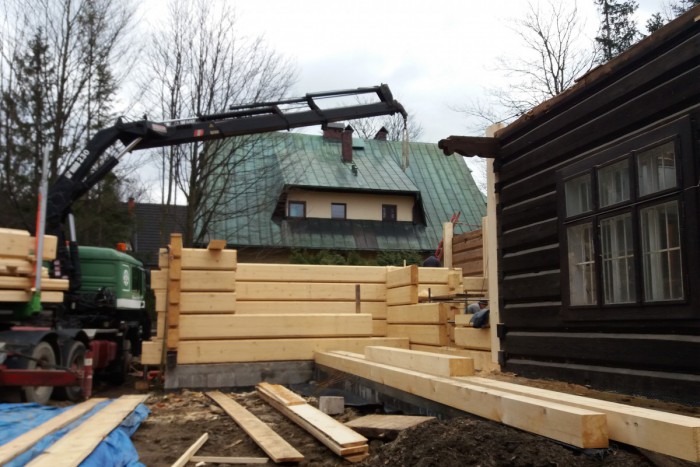 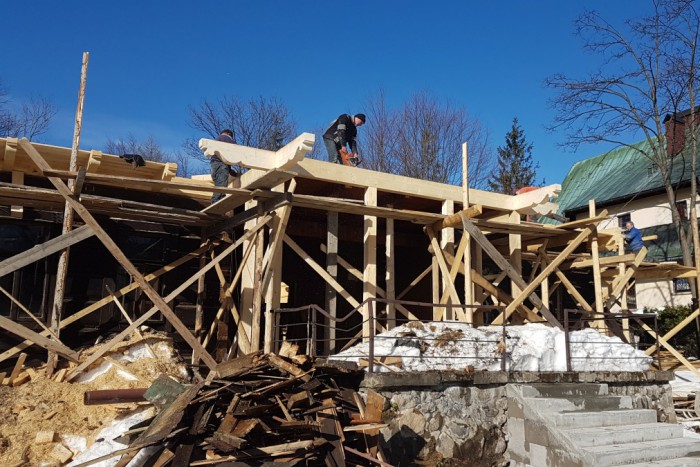 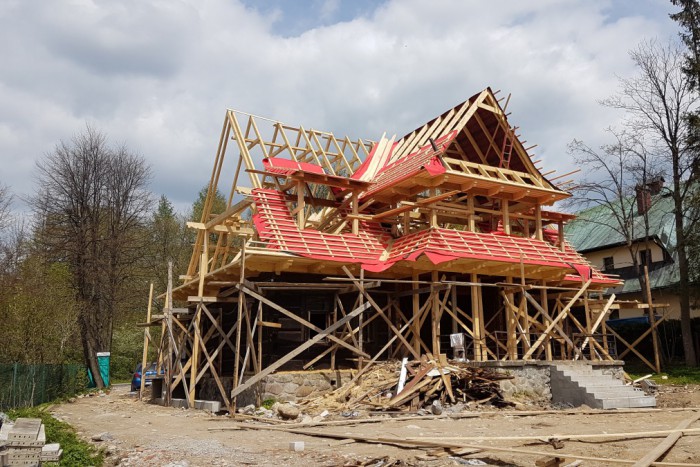 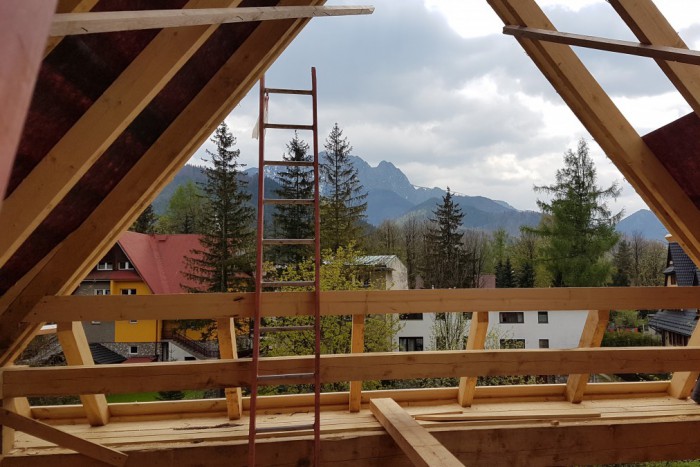 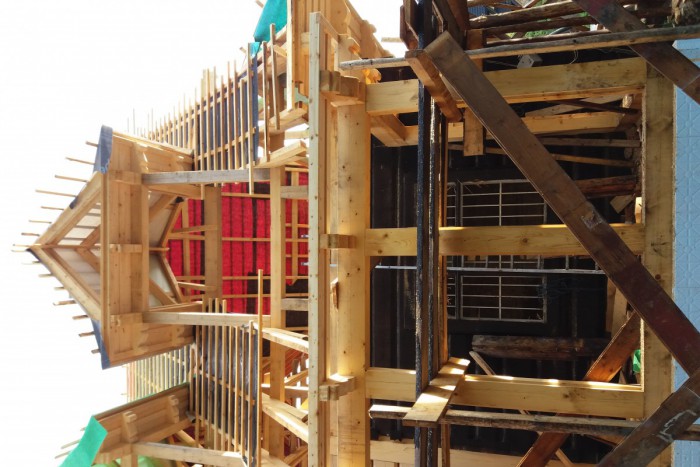 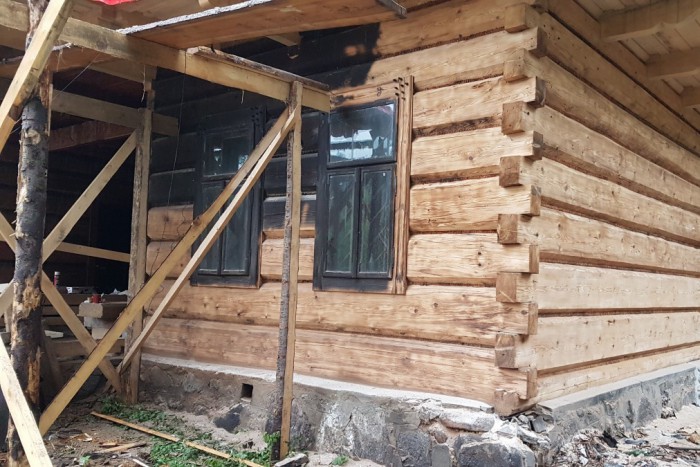 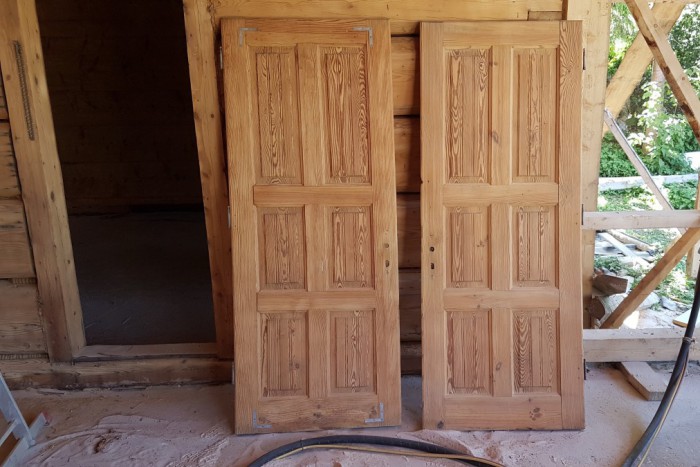 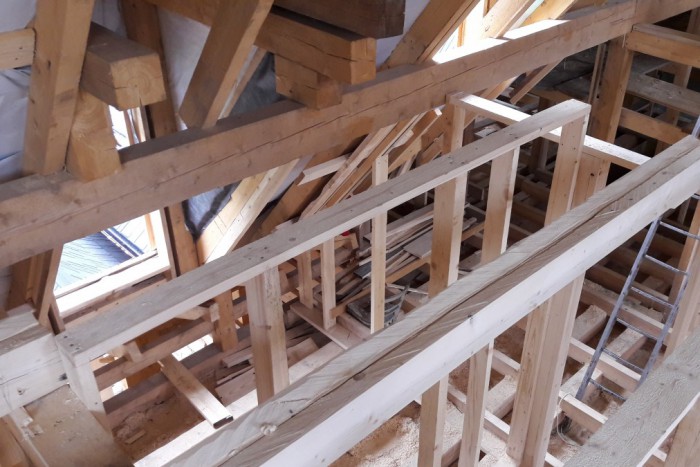 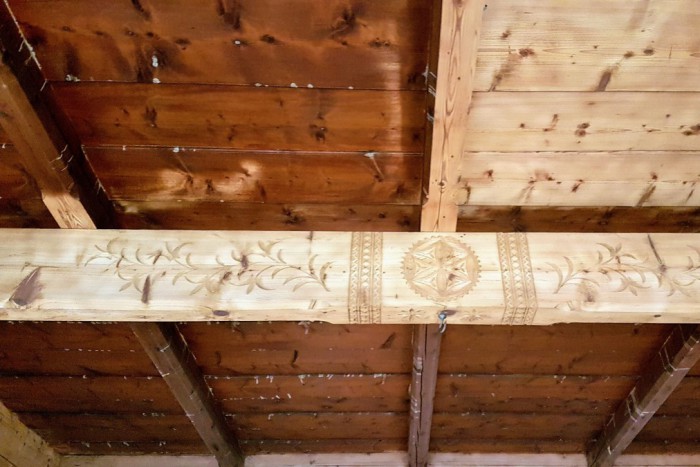 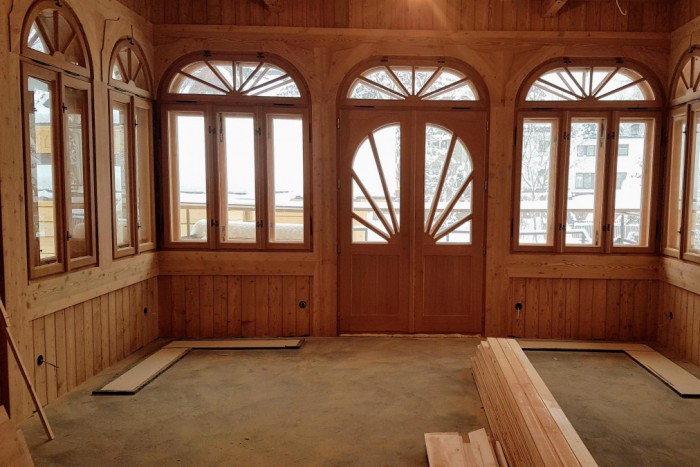 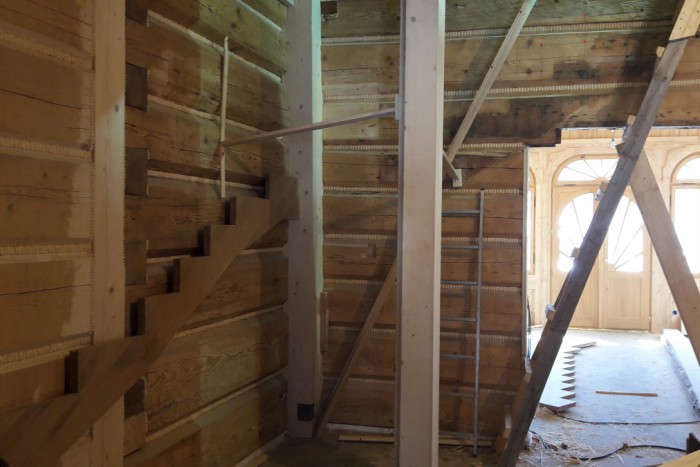 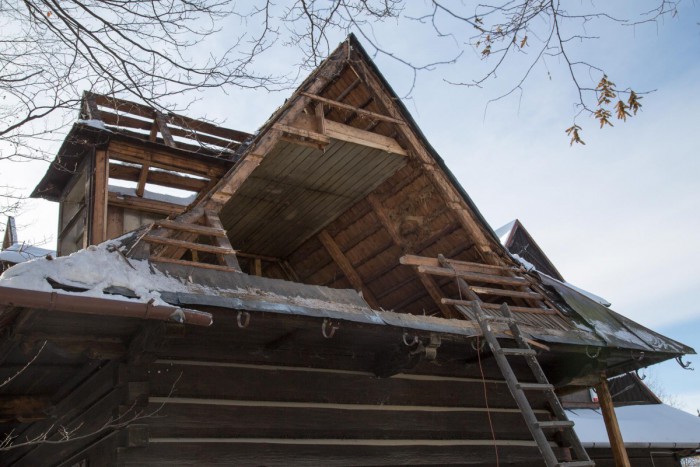 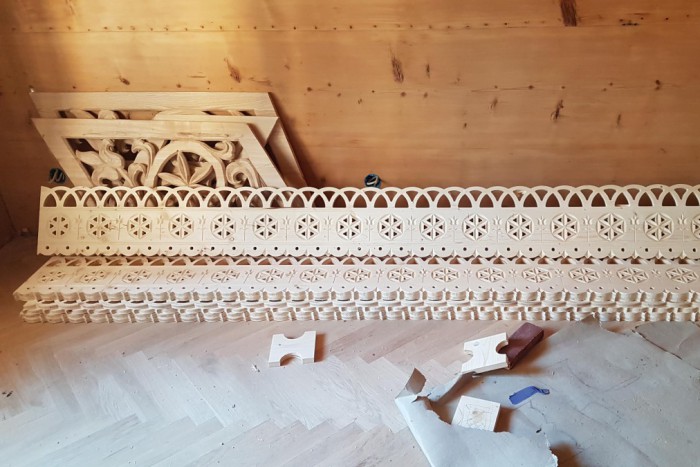 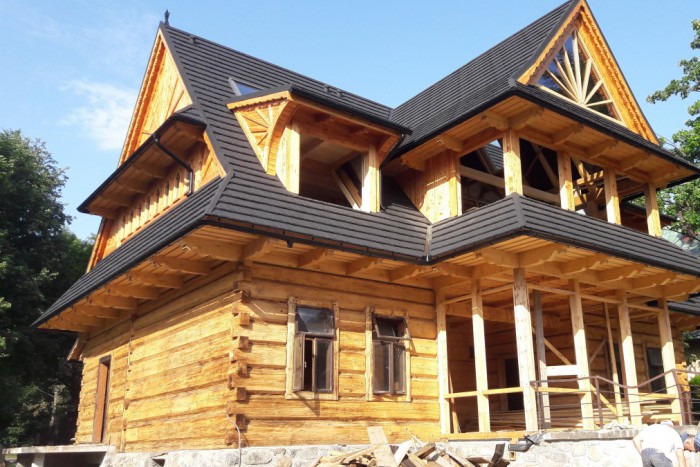